Retinitis Pigmentosa is a group of rare, genetic disorders that involve a breakdown and loss of cells in the retina. Common symptoms include difficulty seeing at night and a loss of side (peripheral) vision.

What is retinitis pigmentosa?

Retinitis pigmentosa (RP) is a group of rare, genetic disorders that involve a breakdown and loss of cells in the retina—which is the light sensitive tissue that lines the back of the eye. Common symptoms include difficulty seeing at night and a loss of side (peripheral) vision. 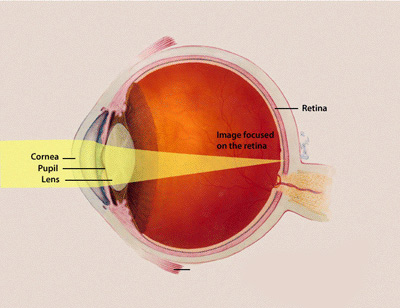 RP is an inherited disorder that results from harmful changes in any one of more than 50 genes. These genes carry the instructions for making proteins that are needed in cells within the retina, called photoreceptors. Some of the changes, or mutations, within genes are so severe that the gene cannot make the required protein, limiting the cell’s function. Other mutations produce a protein that is toxic to the cell. Still other mutations lead to an abnormal protein that doesn’t function properly. In all three cases, the result is damage to the photoreceptors.

Photoreceptors are cells in the retina that begin the process of seeing. They absorb and convert light into electrical signals. These signals are sent to other cells in the retina and ultimately through the optic nerve to the brain where they are processed into the images we see. There are two general types of photoreceptors, called rods and cones. Rods are in the outer regions of the retina, and allow us to see in dim and dark light. Cones reside mostly in the central portion of the retina, and allow us to perceive fine visual detail and color. 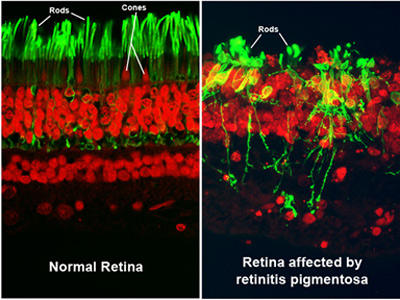 Image courtesy of Robert N. Fariss, Ph.D., chief of the NEI Biological Imaging Core, and Ann H. Milam, Ph.D., former professor in the Department of Ophthalmology at the University of Washington.

How does RP affect vision?

In the early stages of RP, rods are more severely affected than cones. As the rods die, people experience night blindness and a progressive loss of the visual field, the area of space that is visible at a given instant without moving the eyes. The loss of rods eventually leads to a breakdown and loss of cones. In the late stages of RP, as cones die, people tend to lose more of the visual field, developing tunnel vision. They may have difficulty performing essential tasks of daily living such as reading, driving, walking without assistance, or recognizing faces and objects.

How is RP inherited?

To understand how RP is inherited, it is important to know a little more about genes and how they are passed from parent to child. Genes are bundled together on structures called chromosomes. Each cell in your body contains 23 pairs of chromosomes. One copy of each chromosome is passed by a parent at conception through egg and sperm cells. The X and Y chromosomes, known as sex chromosomes, determine whether a person is born female (XX) or male (XY). The 22 other paired chromosomes, called autosomes, contain the vast majority of genes that determine non-sex traits. RP can be inherited in one of three ways:

In autosomal recessive inheritance, it takes two copies of the mutant gene to give rise to the disorder. An individual with a recessive gene mutation is known as a carrier. When two carriers have a child, there is a:

In this inheritance pattern, it takes just one copy of the gene with a disorder-causing mutation to bring about the disorder. When a parent has a dominant gene mutation, there is a 1 in 2 chance that any children will inherit this mutation and the disorder.

In this form of inheritance, mothers carry the mutated gene on one of their X chromosomes and pass it to their sons. Because females have two X chromosomes, the effect of a mutation on one X chromosome is offset by the normal gene on the other X chromosome. If a mother is a carrier of an X-linked disorder there is a:

How common is RP?

RP is considered a rare disorder. Although current statistics are not available, it is generally estimated that the disorder affects roughly 1 in 4,000 people, both in the United States and worldwide.

How does RP progress?

The symptoms of RP typically appear in childhood. Children often have difficulty getting around in the dark. It can also take abnormally long periods of time to adjust to changes in lighting. As their visual field becomes restricted, patients often trip over things and appear clumsy. People with RP often find bright lights uncomfortable, a condition known as photophobia. Because there are many gene mutations that cause the disorder, its progression can differ greatly from person to person. Some people retain central vision and a restricted visual field into their 50s, while others experience significant vision loss in early adulthood. Eventually, most individuals with RP will lose most of their sight.

How is RP diagnosed?

Are there treatments for RP?

A number of services and devices are available to help people with vision loss carry out daily activities and maintain their independence. In addition to an eye care professional, itís important to have help from a team of experts, which may include occupational therapists, orientation and mobility specialists, certified low vision therapists, and others. NEI has more information on living with low vision.

Children with RP may benefit from low vision aids that maximize existing vision. For example, there are special lenses that magnify central vision to expand visual field and eliminate glare. Computer programs that read text are readily available. Closed circuit televisions with a camera can adjust text to suit oneís vision. Portable lighting devices can adjust a dark or dim environment. Mobility training can teach people to use a cane or a guide dog, and eye scanning techniques can help people to optimize remaining vision. Once a child is diagnosed, he or she will be referred to a low vision specialist for a comprehensive evaluation. Parents may also want to meet with the childís school administrators and teachers to make sure that necessary accommodations are put in place.

For parents of children with RP, one challenge is to determine when a child might need to learn to use a cane or a guide dog. Having regular eye examinations to measure the progress of the disorder will help parents make informed decisions regarding low vision services and rehabilitation.

An NEI-sponsored clinical trial found that a daily dose of 15,000 international units of vitamin A palmitate modestly slowed the progression of the disorder in adults. Because there are so many forms of RP, it is difficult to predict how any one patient will respond to this treatment. Talk to an eye care professional to determine if taking vitamin A is right for you or your child.

An artificial vision device called the Argus II has also shown promise for restoring some vision to people with late-stage RP. The Argus II, developed by Second Sight with NEI support, is a prosthetic device that functions in place of lost photoreceptor cells. It consists of a light-sensitive electrode that is surgically implanted on the retina. A pair of glasses with a camera wirelessly transmits signals to the electrode that are then relayed to the brain. Although it does not restore normal vision, in clinical studies, the Argus II enabled people with RP to read large letters and navigate environments without the use of a cane or guide dog. In 2012, the U.S. Food and Drug Administration (FDA) granted a humanitarian device exemption for use of the Argus II to treat late-stage RP. This means the device has not proven effective, but the FDA has determined that its probable benefits outweigh its risks to health. The Argus II is eligible for Medicare payment.

What other research is being done?

NEI supports research to develop a variety of treatments to prevent vision loss and restore sight. Gene therapy for several different types of RP has shown promise in the laboratory. In a landmark clinical trial, gene therapy for a retinal disorder called Leber congenital amaurosis (LCA) led to improved vision for people with that disorder. This and other gene therapy clinical trials for LCA are ongoing to establish a maximally safe dosage and determine the long-term benefits of treatment. Stem cells have also shown promise in the lab. Thanks in part to basic research supported by NEI, the company Advanced Cell Technologies is conducting a clinical trial to test the safety of stem cell treatments for a type of retinal disorder called macular degeneration. Other researchers, including a team at NEI, are gearing up for similar trials. NEI researchers are also evaluating various drug and nutritional therapies in the lab. See the list of clinical trials on RP (link is external).

NEI is part of the National Institutes of Health (NIH) and is the Federal government’s lead agency for vision research that leads to sight-saving treatments and plays a key role in reducing visual impairment and blindness.